The Hawaiian Islands are a hot spot for corporate destination events. Chef Bev Gannon’s thirty years of experience planning and executing corporate events is one of her most powerful attributes. No event is too big for her to tackle and successfully execute. She is a leader and driving force in the Hawaiian Islands in making these large upscale events possible. Our client list is extensive as are the testimonies of our extremely happy guests. Celebration’s offers exclusive venues to host your off-site corporate events. We are proud of the numerous reviews from our corporate clients proclaiming the meal that they were served at their Celebration’s event was “The best meal they’ve had on the island”.

Celebrations can handle every detail for your corporate event in Hawaii.

Clients and Partners include: 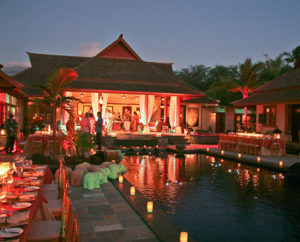 Lighting… “It’s all about the lighting!”

Celebrations offers a different approach to lighting. Utilizing the knowledge and experience of celebrity lighting designer Joe Gannon. We create custom lighting designs and use light in so many ways that are both functional and beautiful. We can bring your event to life.

After the Navy, the Philadelphia native packed up for college in Northern California where he and a few friends started a musical group called The Kingston Trio. “I played bass, but wasn’t any good at it. And I couldn’t sing, either,” Joe says with a chuckle. So he put down his bass, picked up his degree from Menlo College Business School (and a #1 class ranking) and moved to Minneapolis to work as an executive for a grocery store chain. A year later he heard his old buddies on the radio singing “Hang Down Your Head Tom Dooley” and realized the music business was his true calling. So he headed back to California and became the road manager for The Kingston Trio which went on to become a folk music sensation across America.

Joe was instrumental in changing the staid, lackluster shows of the time into true theatrical events. In 1970, he was the first to use moving sets on a concert stage, this time working with Neil Diamond.

And the jobs kept coming. He ran Frank Zappa’s record company, produced records for CBS, was road manager for Bill Cosby and staged Madonna’s first film appearance. Joe traveled the world as a producer, director and lighting designer for such stars as Alice Cooper, Teddy Pendergrass, Luther Vandross, Barry Manilow, Julio Iglesais and almost every entertainer represented by rock ‘n’ roll manager Shep Gordon. It was Joe, Alice Cooper and Shep Gordon who were responsible for yet another industry innovation: the rock ‘n’ roll extravaganza, that one-of-a-kind stage show that generated more press than the music itself.

It was during his show biz days that he met his future wife, Bev, who at the time was a road manager for Liza Minnelli. He always encouraged her to follow her true passion – cooking. Years later, they met again in Dallas after Bev had shifted careers and started her own catering company. They later married on Maui in 1980 and moved to the Valley Isle.

From the Kingston Trio to Bev Gannon.